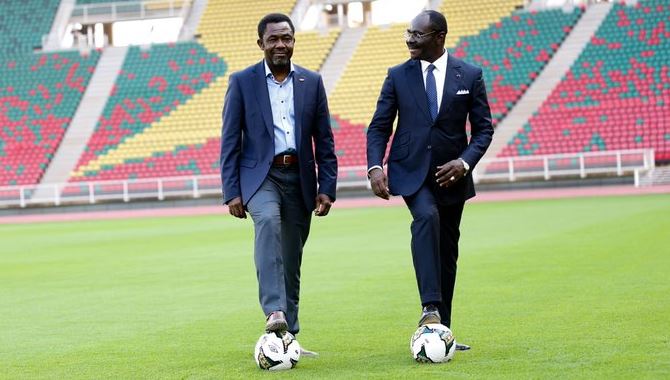 The Confederation of African Football is focusing on the organization of the 2021 African Cup of Nations, with reports of a possible cancellation of the event. With less than a month to go before the tournament kicks off, the body told Sport News Africa that it is no longer commenting on the rumors.

After rumors of a postponement, followed by those of a relocation to Qatar, the 2021 African Cup of Nations is once again at the heart of the debate. With just over three weeks to go before the competition kicks off, French media outlet RMC has shaken up the world of African football by announcing that the Confederation of African Football is "considering" a possible cancellation. This decision could be taken because of the resurgence of the Covid-19 epidemic in Europe with the Omicron variant.

An Egyptian media went further and indicated that CAF would make an important announcement later today with the cancellation of the tournament planned in Cameroon. This was enough to set public opinion ablaze once again. Except that in fact, a cancellation is not on the agenda. No meeting is even scheduled for this Wednesday or in the coming days to discuss this point, according to our information. Contacted by Sport News Africa, CAF's director of communications, Alexandre Siewe, dismissed reports of a cancellation of AFCON 2021. The message is clear: "No time to comment on rumors".

The arrival in Cameroon of the secretary general of CAF, Veron Mosengo-Omba, has accelerated the preparations. "CAF and the Cameroonian state through its Ministries of Sports and Health have found common ground on health management, protocols Covid-19 of the AFCON 2021 in Cameroon," said the Organizing Committee of the (COCAN) in a statement. This communication is a response to the pressure put by the European Club Association (ECA), led by English clubs, which threatens not to release players for the competition. Decision motivated again by the resurgence of Covid-19 cases and the lack of a clear health protocol.

In March 2021, these same clubs had already tried to hold back players who were supposed to take part in the last two rounds of the 2021 Africa Cup of Nations qualifiers. The health restrictions linked to Covid-19, notably in force in England, had been put forward. The African federations had then lobbied to assert their rights and obtain the release of the players for the international break. Nine months later, the situation seems to be repeating itself.

A broadcasting agreement with Sky Sports for the 2021 African Cup of Nations
Except that it will now be difficult to cancel this edition of the 2021 AFCON. "If CAF were to cancel this AFCON without a major reason beyond human control, you can't imagine the amount of money it would have to pay to Cameroon in compensation," said a source within the body. Given the framework agreement signed between CAF and Cameroon for the organization of the tournament, "CAF can not afford to pronounce a cancellation because of pressure from clubs," continued the source.

Especially since the same day, Sky Sports announced that it had acquired the broadcasting rights for all 52 matches of the 2021 AFCON. "This event is consumed not only by Africans but also has a global audience. In Cameroon, we are planning a bigger and better event that will attract millions of viewers," said the secretary general of CAF, visibly far from asking the question of a cancellation.

All 52 games of the 2021 Africa Cup of Nations tournament will be broadcast live on Sky Sports in January and February.