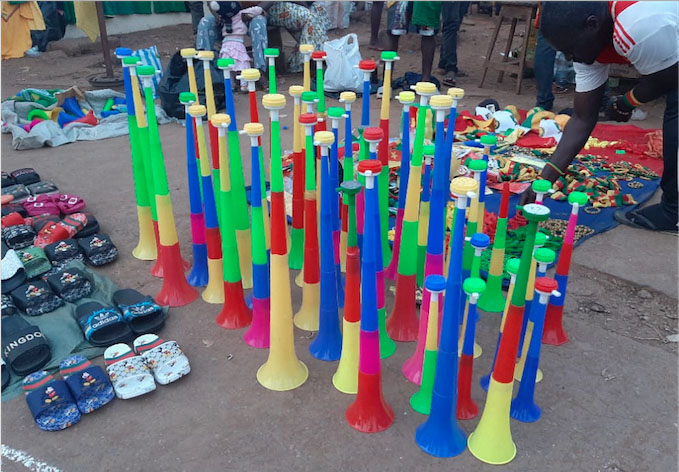 In Yaounde, small bars and restaurants, sports equipment and gadgets are surfing on the wave of the AFCON to sell a maximum of products in the markets and around the stadiums.

Brice Onomo has always lived off his father. But that was before January 9, the opening day of the 2021 African Cup of Nations. This student at the University of Yaounde II has created his own sources of income. And it is thanks to the continental tournament. The 21-year-old sells vuvuzelas in the colours of several nations qualified for the competition. He operates during his office hours and at weekends. His goods sell for 500 and 1000 CFA francs. To sell his products, Brice has set up shop a few metres from the Ahmadou Ahidjo sports stadium in Yaoundé. It's a strategic position," smiles the young student. From this location, I reach a target clientele.

The business is thriving: "The products are selling well. Especially on Cameroon match days: I can sell between 25,000 and 50,000 CFA francs in a day." Willy does not earn that much. He has to commute between the Olembe Complex stadium and the few fan zones in the capital. His job is to sell the countries' banners. "The flag costs 100 CFA francs. The most popular are those of Cameroon and Gabon," he explains.

At the end of the day, he says he makes an average of 10,000 CFA francs. Sometimes," he continues, "on match days, I sell 200 flags, even more. Fortunately for me, Cameroon has reached the last 16 and will stay in Yaoundé. I have already placed a new order."

In a specialised shop, located in the Central market of Yaounde, one has stocked up on goods in the colours of the qualified countries. Here, one finds all sorts of gadgets: bracelets, whistles, headbands, plastic glasses, vuvuzela, scarves, flags, etc. The best-selling items are shirts, polo shirts and caps. Fans are also attracted by the hairband incorporated in the colours of the participating nations. "Here, fans can dress in their teams' colours from head to toe. Our customers are especially fans and retailers," says the manager. He hopes to ride the wave of his country's victories as long as possible to sell as many merchandise items as possible. As long as the Indomitable Lions are winning, my business is doing well," he says. After ten days of competition, I can say that the AFCON  2021 is really sweet." In this quest for gain around the competition , restaurateurs are also rubbing their hands.

At the beginning of January, Briand, Michelle and Stéphanie launched their little business: a restaurant that offers delivery services. The restaurant offers a little bit of everything: aperitifs of all kinds as well as juices and fruit salads; traditional Cameroonian and African meals. Among the many customers who flock to this place, Stephanie noted the presence of French and Ghanaian journalists. "When they come, they like to order ndolè (a famous Cameroonian dish made from green leaves)," says the young entrepreneur. When customers are not eating on the spot, Briand makes deliveries to the fan zone on his scooter. The three partners have the ambition to continue their activity even after the competition.