AFCON 2021: The revelation of African coaches 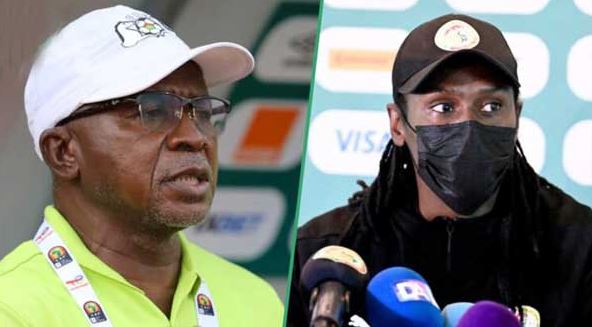 AFCON 2021: The revelation of African coaches

The last two AFCONs won by so-called local coaches and the recent results of several technicians trained in Africa are reshuffling the cards within African federations. More and more local technicians are being given a chance to coach their national team or a club.

A number: 15. 15 of the 24 nations that took part in the 2021 African Cup of Nations had a local coach. And it was one of them, Aliou Cissé, who lifted the trophy with Senegal against the suspended Egypt of Carlos Queiroz. A figure that confirms a trend already observed during the 2019 edition, the first with 24 teams, when there were 9 technicians on the benches. It was once again a so-called local coach, Djamel Belmadi, who had enabled Algeria to win the second continental title in its history, against... Aliou Cissé already.

Add to that the recent performances of Burkina Faso with Kamou Malo, the rise of Mali with Mohamed Magassouba, not to mention the attractive Comoros with Amir Abou, and you can see that the balance has shifted in favor of local technicians in the national teams. In the recent past, the African Cup of Nations was more the business of the famous white wizards, whose powers seem to be less effective with each passing edition. And this emergence of local coaches at the head of national teams, some even make it an ideological battle.

Kamou Malo: "We must be allowed to develop''
Kamou Malo did not hide it before the semi-final between Burkina Faso and Senegal. "Aliou Cissé and I have the same fight for a lot of visibility on African coaches. Not long ago, each country was looking for its "wizard". I am not going to pronounce a color. It is to tell you that we are hungry and we can achieve our goals, "said the technician of the Stallions, before continuing: "It is necessary that African leaders trust this African expertise and especially this support. The others have developed to such an extent that they are invading us. So we must be allowed to develop.''

This has given ideas to certain federations, which have noticed that local coaches can have interesting results, or at least equivalent to certain technicians who come from elsewhere and are recruited at a high price. And to do this, they had to invest in training. This is a gamble taken by several countries, including Burkina Faso, where the national technical director, Pascal Yougbare, indicated in an interview with Deutsche Welle that for the past ten years or so the country of honest men "has been emphasizing the training of local coaches, notably with the support of FIFA and CAF. There has also been an "awareness of the country's own potential and the need to develop what the various countries have as local resources.

Awareness and training of local coaches
"Africa has made a leap in training over the last ten years," explained Mohamed Magassouba, the Malian coach, to go along with this. With a new generation of coaches trained locally, even if most of them then went on to train in European schools to perfect their knowledge, the technical level has risen considerably. To the point where, for certain calls for applications, the federations now give preference to the profiles of local technicians. This is a rebalancing of the chances of everyone to obtain a position, where national coaches were at a serious disadvantage until recently.

This is undoubtedly the beginning of the emergence of new profiles labelled "local", but not only at the level of national teams. The clubs are also following this trend to put more trust in local technicians, following the example of Al Ahly, which has successfully bet on the South African Pitso Mosimane. This is proof that a real change of mentality is taking place and that the myth of the white wizard is taking a big hit.