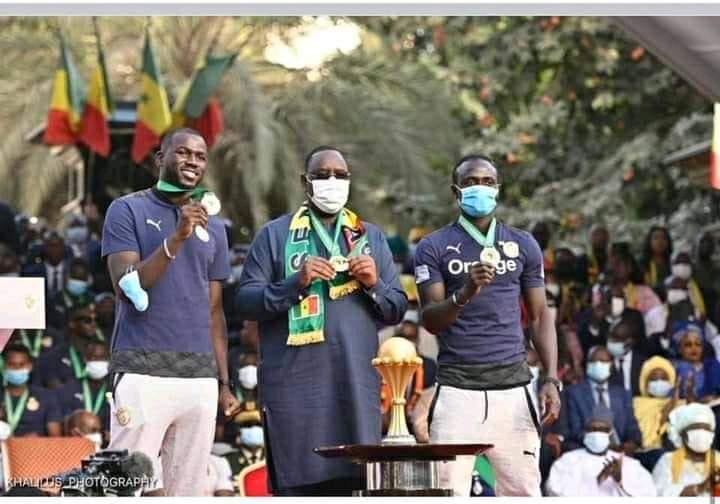 The Senegalese national team was received on Tuesday at the presidential palace by President Macky Sall during a reception organized in honor of the African football champions. The Lions received the honors of the nation before being elevated to the rank of officers of the National Order of the Lion. Coach Aliou Cissé was promoted to the rank of Commander of the National Order.

The "Heroes" of the nation received the honors of the nation during a ceremony attended by all the members of the government, the executive committee of the Senegalese football federation (FSF), former internationals as well as artists and celebrities. After the unrealistic parade of Monday on their return from Cameroon, it is the turn of the state authorities to show their gratitude to the Lions for having written the name of Senegal in the history of the African Cup of Nations.

To reward such a feat, the Senegalese government did not skimp on resources. It granted each of the 52 members of the delegation, a sum of 50 million FCFA, a 200 square meters land in Dakar and another 500 square meters land "in the new city of Diamniadio to form the City of the Tanière, in memory of this first victory at the AFCON" revealed President Sall. Rewards worthy of this great achievement of Kalidou Koulibaly's teammates.

The latter had previously thanked the Head of State for his unfailing support. "The speech of this day could not be long, but must just be expressive, translating our deep gratitude to you, your unfailing commitment to our side, your belief in our abilities and especially your support every day so that we achieve our goal which was to bring the cup home," said the captain of the Lions. A speech completed by this gesture of the players who decided to offer President Macky Sall a medal of African champion.

Previous generations magnified
A reception marked by solemnity and nostalgia and began with a minute's silence in memory of the three young people who died in the stampede at the reception of the Lions yesterday Monday. Those who followed in the presidium also did not fail to honor the memory of the precursors of this national team. Koulibaly was keen to pay a vibrant tribute "to all those people who have had the honor of wearing the jersey of the Senegalese national team.

The legendary Senegalese sports journalist Abdoulaye Diaw first recalled the reasons for this late coronation of Senegal, due, according to him, to the absence of Senegal in CAF between 1957 and 1965. He went back to the nebulous events (history of goal-average) that deprived the Lions of a first final during their first participation in the 1965 AFCON in favour of Tunisia. He ends by naming the great men who built Senegalese football. From Raoul Diagne, the first coach of Senegal, to Pape Diouf, the former president of OM, and those who reformed the game with Mawade Wade and Lamine Diack.

Going for the World Cup
This reception was also the place to see the ambitions of the State of Senegal and the federation for future events. "I am not asking you to win the World Cup, but to reach the semi-finals in Qatar 2022," said President Sall to the Lions. And the president of the FSF, Me Senghor had already mentioned the World Cup 2022. "The Lion has been patient, the Lion has tasted the flavor of the continental trophy, it will seek others,'' said Senghor. Why not, soon with this generation that can bring us more than a continental trophy, we qualify against the Pharaohs of Egypt in a month and go to conquer the world to try to give the Senegalese people results that no African team has ever achieved. Concludes Augustin Senghor.

The ceremony ended at about 7:30 pm after the decorations of all the members of the Senegalese delegation, winners of the first African Cup of Nations in the country's history. Only Edouard Mendy was missing. He had returned to his club to play in the World Club Championship in Saudi Arabia.