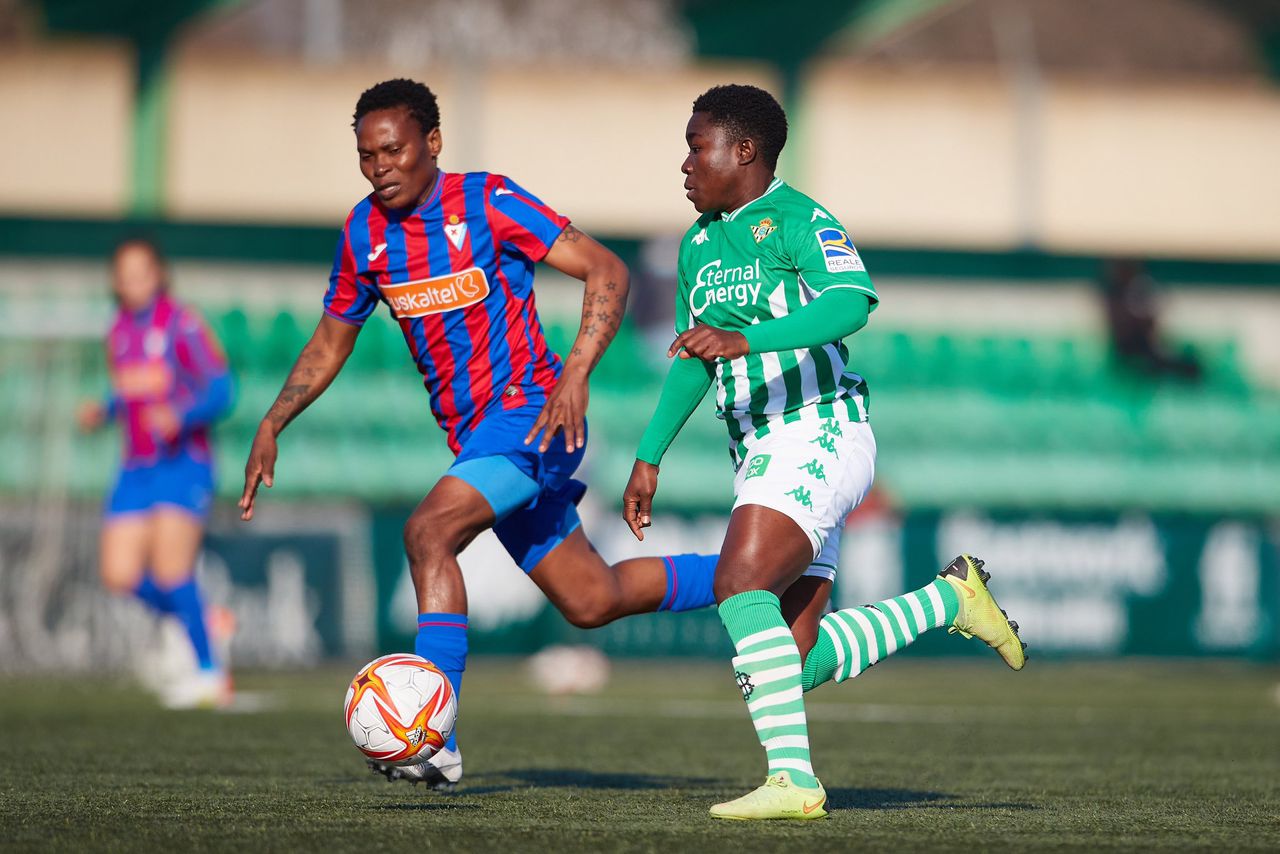 Grace Asantewaa has set a new mark in her burgeoning profile at Real Betis after scoring all her club's goals in two consecutive games in the Spanish Primera Iberdrola.

The Ghanaian attacking midfielder bagged the only goal as the Verdiblanca were forced to a 1-1 draw at Athletic Bilbao in the mid-week. The in-form 21-year-old stretched her incredible run at the weekend by providing the crucial goals to hand Betis the vital victory at home against Eibar.

With her latest strikes, Asantewaa has now hit the net six times and is also the leading goalscorer at Real Betis this season.

Here, we compile the list of top-performing African women who impressed in the major European leagues.

She scored her fifth and sixth league goal this season as her brace inspired Real Betis to a 2-0 win against Eibar. Asantewa netted the opener in the 36th minute after being set up by Ángela Sosa before completing her double three minutes from the full-time whistle. The Black Queen's brace ensured Betis returned to winning ways and nine points off the drop zone.

The Nigeria striker helped Atletico Madrid thrash hosts Villarreal 5-0 with her fourth and fifth goal of the season earlier in the week. Ajibade scored in the 43rd minute to put Atletico three up with a cool finish from a Leicy Santos pass. She made it four with a fine individual effort eight minutes into the second half.

The US-born Nigeria forward helped sixth-placed Sevilla to a 3-1 Primera Iberdrola win over struggling Valencia. With Las Rojiblancas already 2-1 up, she struck in the 63rd minute to guarantee Sevilla victory. The latest goal put her level with Elisa del Estal on four as the club's joint-topscorer this season.

The Nigeria centre-back scored for the third time this season as her Alaves side claimed a 2-1 triumph at home over Madrid CFF. Ohale's 61st minute effort was all Alaves required to earn the maximum points despite Madrid pulling one back at the death. The goal saw the 30-year-old surpassing her scoring feat since beginning her European football journey at Vittsjo in 2017.

The 21-year-old goalkeeper was at her best between the sticks as she kept her seventh clean sheet for third-placed Paris following her side's 1-0 triumph over Issy at the week. With seven clean sheets in 12 French D1 Arkema games, the Nigerian has now equaled her debut season's record in 15 outings.

The Cameroonian forward was the heroine of the match as her solitary effort powered Fleury to a 1-0 victory at Stade de Reims. Her team were destined to share the spoils before Yango scored a stunning 86th minute matchwinner - her first goal of the season with a brilliant finish from substitute Sarah Kassi.

Kipoyi and  Houij continued with their rich vein of forms in the colors of ALG Spor as they cruised past Kayseri Gençlerbirligi. DR Congo's Kipoyi bagged a brace with her fourth and fifth of the season and Tunisia's Houij netted her 13th goal to ensure ALG retain the summit of the log with 16 points from six games.

South Africa's Madiba inspired second-placed Fatih Vatan Sports to a 1-0 win over high-flying Fenerbache. Her lone effort a minute from full time was enough to seal her side's win during the mid-week. For Cameroon's Ada, she opened the scoring in Fatih Vatan Spor 3-0 win over Hatayspor at the weekend.

The Cameroonian striker starred in front of goal for Tranbzonspor as they silenced Dudulluspor 3-0. The former Malabo Kings star left it late to hit two quickfire twice to seal visitors' win.

The Ghanaian striker shone like a million stars in the colours of Antalyaspor, powering them to a 5-0 triumph over Altay Izmir. The 21-year-old forward found the back of the net thrice to see her side move just three points behind leaders Besiktas.

The Kenyan was at her best for Faith Karagumruk as they forced a 1-1 draw at Hakkarigucu. After an early lead for the hosts, Adam struck three minutes from full time to earn a crucial point.

The Ghanaian was in fine form for Lefkothea in a 7-2 crushing of Geroskipou in the Cyprus topflight. The 21-year-old scored her fourth and fifth goal this term in the 17th and 44th minutes to help fifth-placed Lefkothea end a seven-match winless streak.