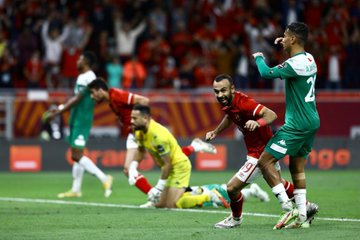 The Moroccan team took an early 13th minute lead with a own goal by Yasser Ibrahim. But the Al Ahly fought back strongly, but failed to level matters after 45 minutes.

In the second half Al Ahly continued to push forward, but the Raja Casablanca team defended in numbers. The Egyptian team continued to dominate play with a 77% ball possession before substitute Taher Mohamed Ahmed Taher made it 1-1 at the stroke of full time.

He collected a good pass by the South African international Percy Muzi Tau and slotted the ball at the far corner.

On penalties all the six Al Ahly players converted including Taher, while Raja Casablanca’s Abdelilah Madkour missed his penalty kick.

It was Al Ahly’s 8th CAF Super Cup win and coach Mosimane’s sixth title since he took charge of Al Ahly in October 2020.

“I thank the players, technical bench and the fans. It was a very tough final, but we are Al Ahly and have the spirit,” said Mosimane after the final. The Al Ahly coach said Raja Casablanca could have had the chance to win if they had continued to push forward and not delay.

Marc Wilmots, the Raja Casablanca coach said it was an outstanding final which was decided by penalties.