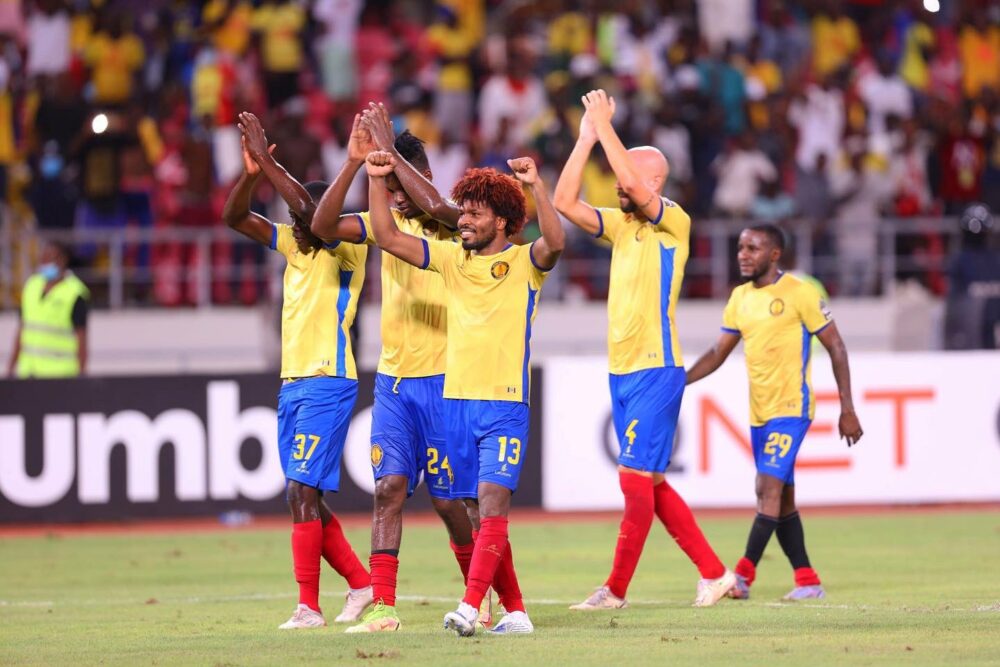 The first leg quarter final matches of the CAF Champions League were played on Saturday across the continent and there were no shortage of goals and surprises from the games. South African giants Mamelodi Sundowns who did not loss a game during the group stages were humbled for the first time this season. They lost on the road to Angola in a game that was punctuated with goals and VAR decisions as well as missed chances from both teams.

Mamelodi Sundowns were forced to endure a 2-1 defeat to Petro de Luanda at the Estadio 11 de Novembro on Saturday night.

The Brazilians got off to the perfect start when Lyle Lakay broked the deadlock after his free kick took a deflection before finding the bottom corner for the opener five minutes into the game.

The goal from the visitors did not dampen the spirit Luanda as the home side managed to level matters 10 minutes later when Tiago Azulao showed his composure to find the back of the net with a first time volley from a fine cross at the left corner.

Sundowns should’ve restored their lead in the 34th minute when Themba Zwane beat the goalkeeper but only to find the upright before Peter Shalulile failed to slot the ball home from the rebound.

The Petrol boys crafted a lead and complete the turnaround in stoppage time when Yano found the back of the net from close range as the game went into the half time break. A cross from the right flank was mishandled by Sundowns keeper Onyango and paved the way for an onrushing attacker who smashed the ball into the roof of the net for Petro's second goal.

Shalulile had another chance in the 54th minute to draw the game level but the Naiban fired his effort over the crossbar inside the box.

Sundowns pressed for the equalizer by bring on fresh legs in the 64th minute when they made a double substitution exiting Sirino and Morena and replaced them with Lebohang Maboe and Neo Maema.

The referee called on the Video Assitant Referee (VAR) to check for a penalty against Brian Onyango in the 74h minute but play resumed after the check was completed.

The South Africans even had the ball in the back of the net a minute later but the goal was ruled out for offside after another VAR consultation.

Neo Maema thought he had levelled matters in stoppage time with a superb strike to find the top corner but the goal was ruled out after VAR check.

Sundowns pressed forward in the dying stages of the game but were unable to find the equalizing goal as Petro held on to walk away with the win on home soil. This is a definitive advantage as we await the return leg on 23 April in South Africa.