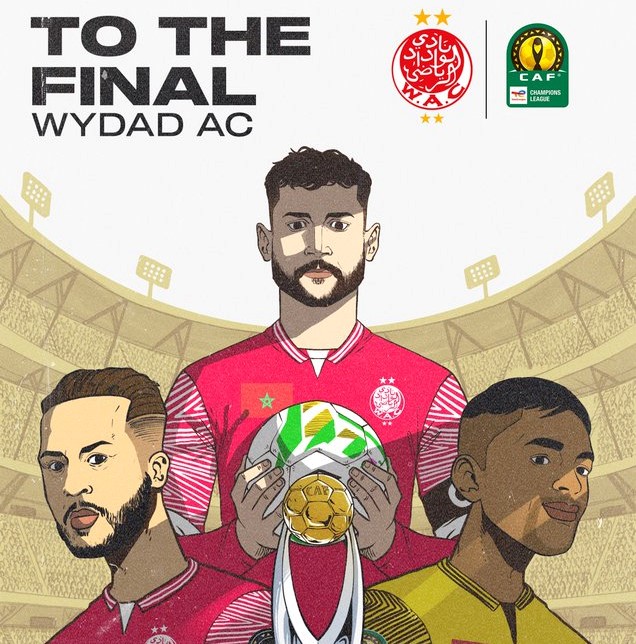 Wydad Casablanca of Morocco are the first  team to make it to the finals of this year's CAF Champions league after seeing off Petro Athletic of Angola 4-2 0n aggregate in the semi finals. The Moroccans who went into Friday night's second leg at home with a 3-1 away advantage played a 1-1 draw at the Mohamed V stadium.

The Moroccan team hit the ground running in the first leg of the CAF Champions League semi-final with a 1-3 win over Petro Luanda a week ago. The Moroccans won with three away goals and above all in style, and entered the second leg with confidence.They will be watching the other semi finals with keen interest between  Al Ahly and  ES Setif.

Wydad's coach Walid Regragui and his men took no chance nor underestimated their opponents prior to the game "We are not talking about a final now. We respect Petro Luanda, and if we talk now about the issue of the final's stadium, it will be considered as if we denigrate the Angolan team," he said in a press conference on the eve of the match, when asked about the controversy surrounding the host country of the final. "The big clubs respect their rivals, and as we have not yet qualified, I will not talk about anything outside the framework of our match tomorrow," he insisted. Proof that the technician had learned the lesson of the double confrontation against CR Belouizdad.

"Like Belouizdad, they have nothing to lose. They have a good coach and a good team. We will respect them and play a great game at home. What is important for us is to reach the final. I don't want us to relax, to be neither too optimistic nor too negative," concluded the Wydad coach.

The Angolan side had not said their last words and so travelled to the game with a glimpse of hope when they opened scoring on Friday night. Gleison Moreira put the visitors ahead with a long range deflected low short early in the game 21 minutes on the clock.

7 minutes later the home side crafted an equalizer from a corner kick. At the break it was all square and the Moroccans managed the game till full time to win on 4-2 aggregate score line.