Champions League: Manchester City and Liverpool in the semi-finals 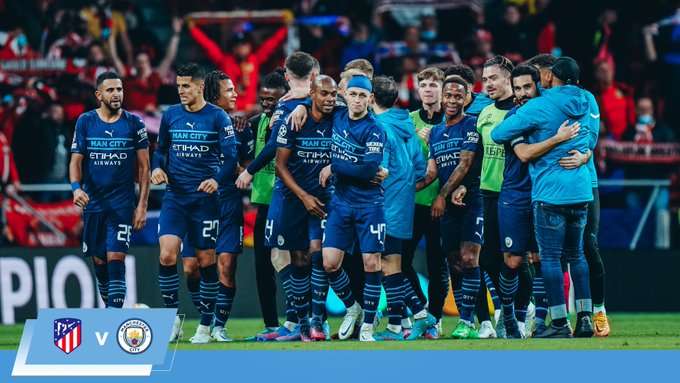 Champions League: Manchester City and Liverpool in the semi-finals

Manchester City and Liverpool have qualified for the semi-finals of the Champions League after Real Madrid and Villarreal. After their 1-0 win in the first leg, the Citizens stunned Madrid on their home turf (0-0) while the Reds moved ahead of Benfica thanks to their 1-3 win in Lisbon last week. The two teams drew on Wednesday night (3-3).

Manchester City will see the semi-finals of the Champions League. After dominating the Colchoneros in the first leg (1-0), the Citizens did not concede a goal in the second leg. The English side were once again in control of the game in the first half, while the Spaniards were content to chase the ball.

Riyad Mahrez's team-mates began to attack Madrid's defensive block in the ninth minute. From a well-struck corner by Kevin De Bruyne, John Stones cut the ball back to the near post. But the English defender saw his header go wide. The home side were uninspiring and struggled to hit Jao Felix and Antoine Griezman up front. Another moment of scare in the first half came when Gundogan hit Oblak's post on 30 minutes after a fine team move.

Atletico Madrid had to score to make up for the deficit in the first leg, but in the second half they came back with better ambitions. Diego Simeone's men were more forward-thinking and finally created their first real chance of the game. The first chance of the game came when Antoine Griezman volleyed a fine pass from Joao Félix just wide of Ederson's goal.

This action was however the beginning of a revolt by the home team, who took the game into their own hands, without managing to find the net. They came close to opening the scoring in the 86th minute but Correa's shot was blocked by John Stones.

The end of the game was marked by scuffles between the two teams, including a red card for Madrid defender Felipe for a bad move on Foden. Despite a few scares in the final minutes, Manchester City confirmed their place in the semi-finals. They will meet Real Madrid.

Goals galore at Anfield
In the other match, Liverpool started against Benfica without their two stars Sadio Mané and Mohamed Salah who were left on the bench. However, this did not prevent the Reds, who won the first leg (1-3), from finding the net in this match. It was Ibrahima Konate who opened the scoring for the English with a fine header (21'). The Portuguese soon responded with Gonçalo Ramos (32'). The two teams returned to the locker room at half-time with the score at one goal apiece.

The second half turned into an even contest for the home side, with Roberto Firmino playing in the front line and proving his coach Jurgen Klopp right. The Brazilian international scored twice (56', 65') to make it 3-1. But the Lisbon side did not give up, despite being behind on the scoreboard. They reduced the score thanks to Yeremchuck (73') before equalizing nine minutes later through Nunez. It is therefore Liverpool who will see the semi-finals. The Reds will face Villarreal.