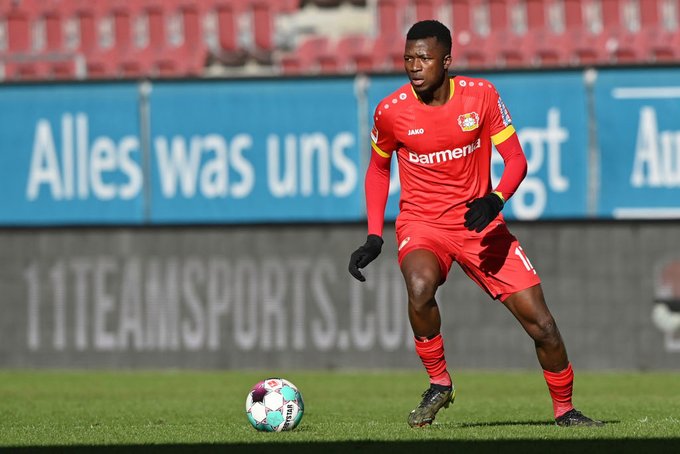 Edmond Tapsoba is having a great season with Bayer Leverkusen. The Burkina Faso defender is one of the best players of the German side. However, the Stallion could join the Premier League next season. Arsenal and Chelsea are showing interest in the defender.

Edmond Tapsoba has been one of the revelations of the 2021 African Cup of Nations. Even on one leg, he multiplied the beautiful interventions and made delightful relays. The 23-year-old defender was included in the team of the tournament even though he was not at 100% of his physical capacity. With his club Bayer Leverkusen, the Stallion also shines. The center-back has played 20 games and scored one goal in the Bundesliga this season. "For a football player, the most difficult thing is to stay consistent. You can play one good game, but you have to be at your best every day and that's what I try to do," Edmond Tasoba told BBC Sport Africa.

His performances do not go unnoticed in world football. "Edmond Tapsoba is going in the right direction. He has shown all the qualities necessary to play in any big club. He has played some good games with Bayer Leverkusen, both in the Europa League and in the Bundesliga," says Burkinabe journalist Moussavou Billa.

Tapsoba wants to win trophies with Burkina Faso
Thanks to his good performances, Tapsoba could join the Premier League, which is welcoming more and more African stars. Arsenal and Chelsea have already expressed an interest in the Burkinabe, who is under contract with Bayer Leverkusen until 2026. "He could play for Liverpool, Manchester United or Chelsea. Or any Premier League club. Edmond can become the next big star of Burkina in the Premier League," Billa said. Aston Villa striker Bertrand Traore is the only Burkina Faso player currently playing in the Premier League.

Edmond Tapsoba also has high ambitions for his national team. "For every African player who plays in Europe, his first dream is to play in the African Cup of Nations and then the World Cup. I think that I can again advance the dream, try to win something with Burkina Faso. The people support me very well. I always try to make them proud of me," promises the Stallion. Burkina Faso will try to validate its ticket for the AFCON 2023. The Stallions are in pool B with Cape Verde, Togo and Eswatini.