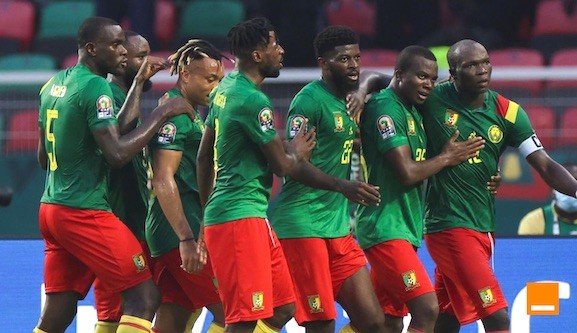 The 2021-2022 season came to an end on 14 June, with the end of the second day of qualifying for the 2023 African Cup of Nations and the friendly matches. It will have been rich in lessons, allowed Senegal to settle on the roof of Africa, seen Algeria tumble, Gambia surprise and DR Congo continue to sink. A look back at a particularly busy year.

THE TOPS
SENEGAL
The Teranga Lions have done everything right in 2021-2022. They won their first continental title on 6 February against Egypt (0-0, 4-2 on penalties) in Yaoundé, after two failed attempts in the 2002 and 2019 finals. The Senegalese became African champions after a slow first round but a much more controlled and convincing knockout phase, and with Sadio Mané at his best. Since then, Aliou Cisse's players have fully confirmed their new status, by qualifying for the World Cup against the Egyptian Pharaohs (0-1, 1-0, 3-1 on penalties), then by winning their first two matches of the 2023 African Cup of Nations qualifiers in their new home of Diamniadio against Benin (3-1) and Rwanda (1-0).

CAMEROON
Cameroon had two objectives at the beginning of the season: to succeed at the AFCON and to qualify for the World Cup. They did not win their sixth trophy, but they did finish on the podium at the expense of Burkina Faso, and their captain Vincent Aboubakar finished as the tournament's top scorer (8 goals). The Indomitable Lions will also return to the World Cup, after eliminating Côte d'Ivoire in the group stage and then Algeria (0-1, 2-1) in stormy circumstances during the return match in Blida. Rigobert Song, who was appointed coach a few weeks before this double confrontation to replace the Portuguese Antonio Conceiçao, has fulfilled the expectations of the Lions' supporters and Samuel Eto'o, the president of the federation, who initiated his appointment.

GAMBIA
Gambia had never participated in any of the finals until they qualified for the Cameroon AFCON at the expense of DR Congo. They showed Cameroon that their presence at this level was nothing short of a coincidence, as they reached the quarter finals against Cameroon (0-2). The Scorpions had previously finished undefeated in a group that also included Mali, Tunisia and Mauritania, and then eliminated Guinea (1-0). The Gambians, coached by a Belgian - Tom Saintfiet - who is a friendly, tactical man, has no other objective than to qualify for the AFCON in Côte d'Ivoire. With three points from two matches, they are still in a position to achieve this.

THE FLOPS
ALGERIA
Even if the Fennecs regained some color in June by beating Uganda (2-0) and Tanzania (2-0) in the 2023 AFCON qualifiers and Iran (2-1) in a friendly, these successes have not really healed the wounds of a catastrophic start to the year. The 2019 African champions, touted as the early favorites to succeed themselves, were eliminated in the first round, beaten by Côte d'Ivoire, Equatorial Guinea and Sierra Leone (one draw, two defeats). Worse, the Algerians were deprived of the World Cup by Cameroon (1-0, 1-2) from a goal by Karl Toko Ekambi ten seconds before the end of stoppage time. Djamel Belmadi, after having attacked the refereeing, then left doubt on his future, decided to stay in charge, by making several changes in his squad. With a first feeling rather positive...

NIGERIA
Just because the Super Eagles beat Sao Tome and Principe 10-0 on June 13 in the 2023 Africa Cup of Nations qualifiers does not mean that all the trauma of the first few months of the year has magically disappeared. Nigeria missed its AFCON in Cameroon, after a promising first round, by being eliminated by Tunisia (0-1). Then they failed on the road to Qatar against a much more realistic Ghana (0-0, 1-1). Since these two traumatic failures for the ebullient Nigerian fans, the Portuguese José Peseiro was appointed coach in place of Augustine Eguavoen, whose position had become untenable. With six points from the first two rounds of the AFCON qualifiers, the former Al-Ahly coach has done the job.

DR CONGO
Congo's downward spiral accelerated in June with defeats to Gabon in Kinshasa (0-1) and Sudan (1-2). These two defeats have already compromised the Leopards' chances of participating in the 2023 African Cup of Nations, as they had already missed the last edition in Cameroon. These setbacks have cost the Argentinian Hector Cuper his place, who was recruited in May 2021 for a monthly salary of 50,000 euros. The South American, under contract until June 2023, was already weakened by his team's elimination against Morocco (1-1, 1-4) in the World Cup play-offs, and his dismissal will cost the state a lot of money. Several former internationals, including Cedric Bakambu, have criticized the federation's lack of organization. We wish the next coach well, who will probably not be picked before August...