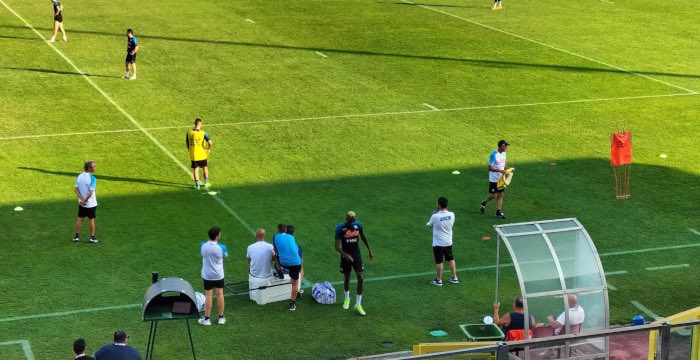 During the second day of training of the Neapolitans at Castel di Sangro, Victor Osimhen and his coach, Luciano Spalletti have a verbal clash. The session was interrupted and the Nigerian international was sent back to the locker room not without difficulty.

Tense resumption on the side of Napoli. While the Italian team has just resumed training, the session was marred by an incident between Victor Osimhen and his coach, Luciano Spalletti. The facts reported by Sky Sport Italia says while the session was held in the presence of the public, the tone rose between the two men, so much so that the Super Eagle was sent back to the locker room, in front of the stunned fans.

Quite nervous since the beginning of the session, the Nigerian international lost his nerves at the time of a confrontation at the end of training. Cameroonian André-Frank Zambo-Anguissa went a bit hard on the Norwegian recruit, Leo Östigard, and a contact occurred between the two men. Victor Osimhen reacts immediately by taking the Indomitable Lion to task, in a virulent way to the liking of his coach who then orders him to calm down. An injunction not to the liking of the former Lille striker, who still does not fall in pressure.

On the contrary, Osimhen continues to blame Zambo-Anguissa for his too rough intervention. This is too much for Luciano Spalletti, who decides to shorten the session of his striker and send him to the locker room. The whole thing was accompanied by a "you talk too much, go take a shower" audible to the many fans who came to attend the session. Forced to do so, Victor Osimhen did not give up, leaving the field and throwing his training kit, despite Matteo Politano's attempt to calm him down. A sequence that since then has been talked about in Italy.