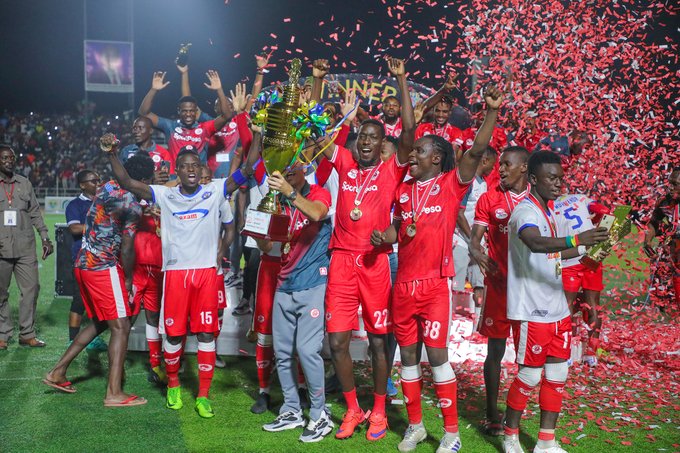 Tanzania giants Simba Sports Club have lifted the Mapinduzi Cup 2022 which climaxed in Zanzibar. The competition which was played from January 2 involved a number of teams from both Zanzibar and Tanzania mainland, with some foreign players invited to take part in the event.

After a goalless first half where the two sides missed several scoring opportunities, Meddie Kagere scored from the spot after 56 minutes at the Amani Stadium to ensure Simba SC lifted the trophy.

“I am very happy to score in the semi final and at the final to help my team lift the trophy,” said the Rwanda International who has been one of Simba’s top scorers in the last three years.

It was also coach Pablo Franco’s first silverware since he took over as Simba coach last November. “I am happy with the way we battled well to win the trophy. There is still a lot of work to do and we shall continue to work hard because the season is still long,” added the Simba coach.

This year the Mapinduzi Cup attracted 10 teams from Zanzibar and Tanzania Mainland.

The Mapinduzi Cup is organized by the government of Zanzibar and the Zanzibar Football Federation (ZFF). The competition is played to commemorate Zanzibar’s Revolution day which is marked annually on January 12th.