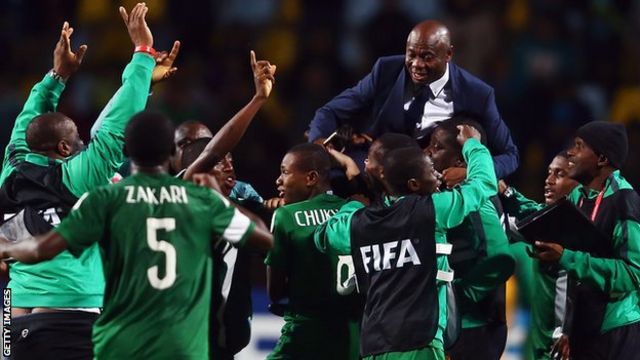 Despite the disappointment at the African Cup of Nations, Augustine Eguavoen will lead the Super Eagles to the 2022 World Cup play-offs. Nigeria will challenge Ghana on March 23 and 29.

Eguavoen was due to hand over his position after the Africa Cup of Nations to Portugal's Jose Paseiro. But the Nigerian Football Federation (NFF) has decided to keep Eguavoen in charge of the team. At least for a while. The African champion will be assisted by Emmanuel Amunike, who will take over after the March deadline.

The information is contained in a statement from the NFF published on Monday, February 7. In view of the positive performance of the Super Eagles at the African Cup of Nations, the NFF Board of Directors has approved a recommendation of the Technical and Development Committee," the statement read. Retaining Augustine Eguavoen as the acting Technical Director, Technical Advisor. While Emmanuel Amunike becomes the Super Eagles coach."

Nigeria is banking on local expertise. It won its last Africa Cup of Nations (2013) with former Super Eagle Stephan Keshi. Amunike, a former Barcelona player, has coached Nigeria's U17 team. He won the 2015 World Cup with them. The 1994 African champion also qualified Tanzania for the 2019 African Cup of Nations, a first since 1980. With Nigeria, he hopes to win the country's fourth star at the 2023 AFCON in Côte d'Ivoire.