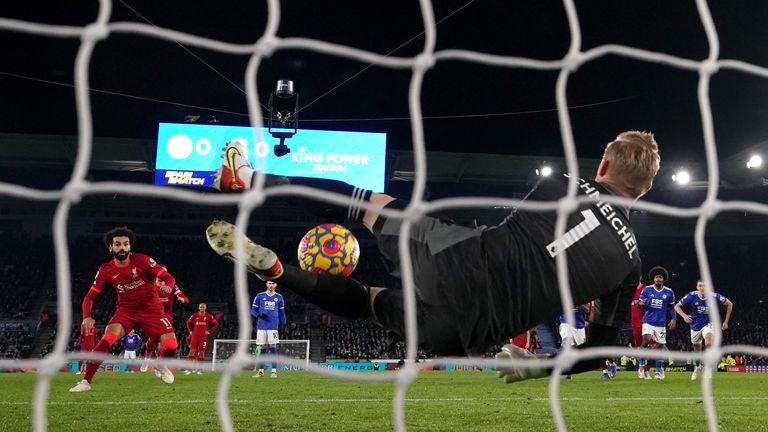 A dark evening for the Premier league's top scorer. Mohamed Salah strangely lost a penalty in Liverpool's 1-0 loss to Leicester City on Tuesday night. Nigerian duo Wilfred Ndidi and Kelechi Iheanacho as well as Ghanaian defender Amartey were all in top form against Salah, Mane and Matip. Ademola Lookman gave the Foxes the win with the only goal of the game in the 58th minute. But the game might have turned out differently had Mohamed Salah not missed a 14th-minute penalty.

He was fouled in the box by Nigeria's Wilfred Ndidi who was forced to play an unusual role as a center back. The Nigerian midfielder clearly was deputizing in a difficult role and easily brought down Salah.

Salah's top scorer ambitions were halted as he stepped forward for the kick, only to be denied by Kasper Schmeichel. In a second attempt for the saved penalty, Salah was again denied this time by the cross bar. This miss could be termed the turning point of the game as Liverpool's early dominance was shattered by the miss. More confidence for the home side who took on a series of counter attacks and long balls. Salah remains at the top of the scoring charts with a tally of just 15 goals.

After Leicester's goal, Jürgen Klopp's men tried to push for an equalizer or more but the resilience of the home side overshadowed every of the Red's effort.

Liverpool's defeat was a great opportunity for them to close the gap on leaders Manchester City (47 pts), who play Brentford on Wednesday 29. The Reds are also in danger of losing second spot to Chelsea, who can overtake them in the standings if they win or draw against Brighton on Wednesday.

Sadio Mane also played the game but was less impactful in front of goal.