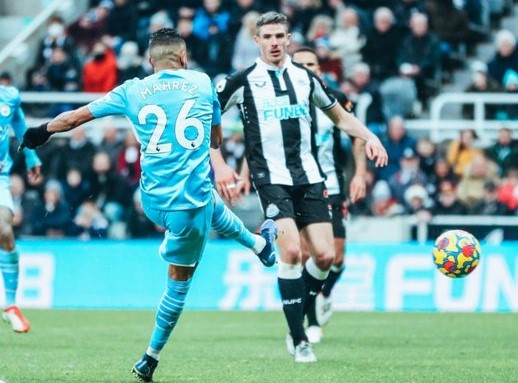 The English Premier League games are coming quick and fairly as the title race warms up between Manchester City , Liverpool and Chelsea but the big question remains.

Who will stop Riyad Mahrez and Manchester City? The Algerian international and the Citizens were once again merciless against Newcastle on Sunday in the 18th round of the Premier League. It's not just a matter of the team's performance, it's also a matter of the team's dominance in the league. It was an attacking festival in which Riyad Mahrez was obviously involved. The African champion scored his team's third goal with a beautiful volley in the 63rd minute.

But as is often the case, Pep Guardiola's men had managed to break down their opponents in the first quarter of play. They opened the scoring after six minutes through Ruben Dias. Cancello made the breakthrough just before the half-hour mark when he was set up by Riyad Mahrez.

The Skyblues, who had little to worry about in this match against a very weak opponent, added to their tally in the 83rd minute with a counter-attack, this time from Rahim Sterling.

With this 14th victory ( 4-0 ) in the Premier League, Riyad Mahrez and his partners (44 points)have set a new record of 14 away wins and consolidate their position at the top. They are now three points clear of the Reds, who played a 2-2 draw away to Tottenham on Sunday evening.

Chelsea fc earlier played a goalless draw away to Wolves