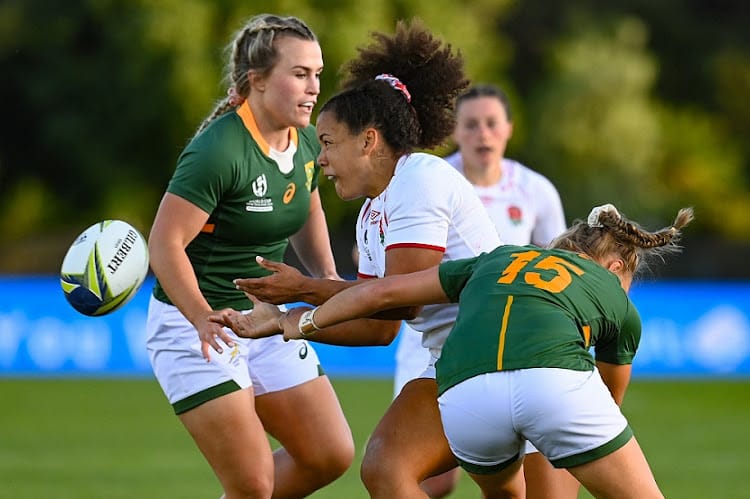 The South Africa women's national rugby union team (springbok) got steamrolled by
England’s Red Roses, as England waved into the World Cup quarter-finals with a 13-try demolition of South Africa, claiming a 75-0 win that extends their unbeaten run to 28 games. Hat-tricks from Rosie Galligan in the second row and from hooker Connie Powell underlined a show dominated by England’s pack as their set-piece and maul ground the Springboks to rubble.

All but one of the tries were registered by forwards, a 64th-minute effort from Abby Dow who was impressive with the little ball she had on the right wing. Poppy Cleall and Sadia Kabeya notched a brace apiece with Shaunagh Brown and captain Marlie Packer dotting down as well. It is telling, though, that the player of the match was awarded to Tatyana Heard at inside centre. She carried with force and dictated the tempo of the game.

Simon Middleton, the England coach, will have to make a difficult decision in the midfield ahead of their quarter-final clash with Australia next Sunday. Middleton was bullish in his post-match interview, labelling the media reaction following his team’s 13-7 win over France “ridiculous”. Last week England battled to break down a stubborn defence. They had no such problems in their final group game.

It was a disjointed start, though, which was understandable given the 15 changes to the matchday 23. Handling errors routinely stifled their attack so England reverted to a simple plan of sticking it in the corner and keeping it with the forwards. Galligan opened the scoring after securing a lineout and dotting down from a maul inside six minutes. South Africa kept coughing up penalties at the breakdown and were down to 14 when Catha Jacobs was carded for a dangerous tackle.

With an extra body in the pack, England won three scrum penalties in 10 minutes. They regularly fumbled the ball but when they kept it tight they were dangerous. Cleall, Galligan, Brown and Powell all scored from close range before the end of the half. “I enjoy looking behind me and seeing my hooker score a try,” Cleall said afterwards to a question concerning the aesthetics of a rolling maul.

England emerged from the tunnel and found their groove. Less than a minute into the second half Powell was over again. That seemed to embolden the Red Roses, who began to give the ball some air. Jess Breach had a rare canter down the left which gave the semblance of backline cohesion, but the ball was once again spilled in contact.

Things finally clicked on 51 minutes with Packer completing a slick move that saw her play a neat give-and-go with Cleall from a lineout. Soon after Galligan had her third with Heard straightening and offloading in the tackle from the back of some magic from Dow who created space down the right.

At that stage the South Africans were exhausted. They defended as best they could but it was like shooting fish in a barrel for the English, who looked like scoring with every attack. Three tries were recorded in the space of four minutes after the hour mark. All involved swift passing and strong carries to see Cleall, Kabeya and Dow go over. Heard was instrumental in every one.

“I loved it,” Heard said of her award-winning performance. “It’s so good to have front-foot ball. Our forwards were really dominant and then giving them space to play in, it was great. I just wanted to put my best foot forward.”

Helena Rowland will likely start at 12 against Australia but England’s strength in depth is something to behold. They emptied the bench before Powell completed her hat-trick from another maul and Kabeya scored late with Rowland igniting a move from deep. Galligan could have had a fourth but she knocked on over the line.

The way World Cup winners Nollie Waterman and Maggie Alphonsi spoke in the post-match analysis on ITV, one might have assumed that England came close to losing or that they put on a dull display. That is a symptom of the standards that the team has set over the last four years. Every knock-on or misplaced pass comes as a surprise. Anything other than a flawless presentation of their skills is regarded as an aberration.

But a resounding win coupled with a clean sheet serves as the perfect springboard for the knockout rounds. England will face sterner tests, but their quest for World Cup glory remains on course.