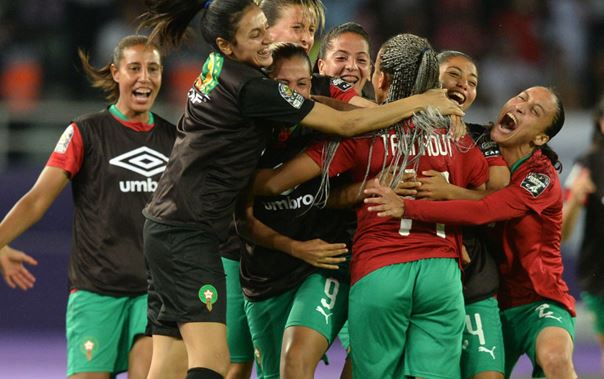 Opposed to Botswana in the quarter-finals of the Women's AFCON 2022 in front of home crowd, Morocco took the upper hand over its opponent and validated its qualification for the semi-finals (2-1). The Moroccan women ensure at the same time their qualification for the 2023 World Cup in Australia and New Zealand.

The Atlas Lionesses continue their flawless run. Morocco has validated its qualification for the last four, and by the same occasion for the World Cup 2023 (2-1). A success that took shape in the second half for Reynald's protégés, but logical in view of the physiognomy of a match that started on a high note. The public of the Moulay Abdallah Stadium of Rabat had just the time to take place in the stands that Sanaa Massoudy placed hers in the lead on the scoreboard (3rd). But the Botswana came back immediately in the game thanks to a free kick of Dithebe (7th).

The Moroccan team dominated the game and was very active, while Botswana was a newcomer in this edition and had only one chance to score. Forced to play the game, Morocco tried to set the pace, but came up against the opposing block well in place. And in spite of the control on the leather, the Moroccans did not manage to find the faults. Rosela Ayane's well-taken volley (43') and Seghir's floating shot (54') sent a shiver down the spine of the crowd, who were only too happy to cheer.

The Moroccans kept pushing forward and were rewarded just before the hour mark. Yasmin Mrabet headed in a cross at the far post (59'). The goal was a lifesaver for the Atlas Lionesses, who were finally free and looking to put themselves in the clear. But when it was not the crossbar (77th), it was the Botswana goalkeeper who stood in their way to maintain the suspense. But, without any real dangerous situation, Botswana did not manage to approach the Moroccan cages.

The clock was ticking and the outcome of the match was sealed. The final whistle intervened, synonymous with the qualification of the host country in the semi-finals, to the delight of the public. The Moroccan women are still in the race in this Women's AFCON. They have four victories in as many games and maintain the dream of a home victory. First objective achieved, they have already ensured their qualification for the World Cup 2023 with their presence in the last four. But the appetite comes with eating, they will want more now and go to win a first continental trophy.