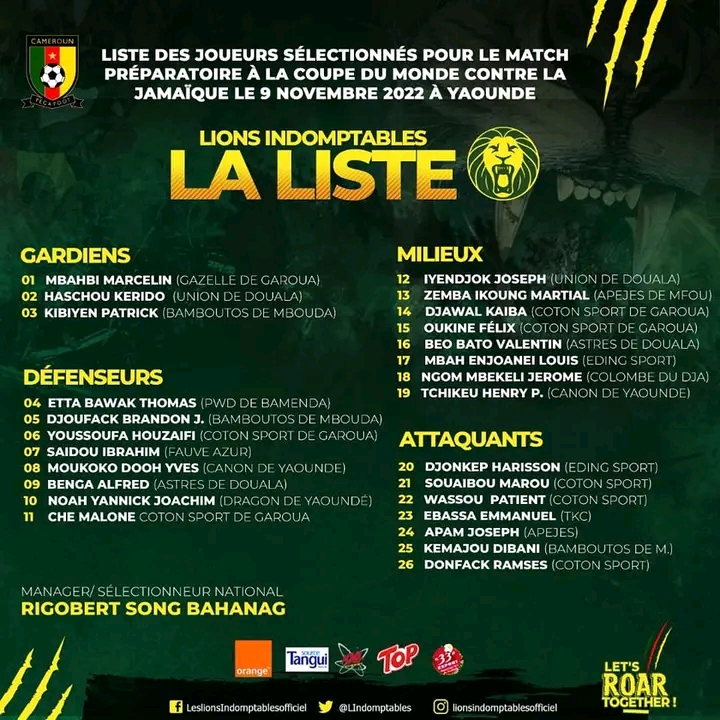 PWD’s full-back, Thomas Eta Bawak has been listed amongst 26 players plying their trade in the land, to enter camp in the days ahead, in preparations for the Qatar 2022 FIFA world cup.

Coach Rigobert Song aims at snapping a couple of players to blend with professionals ahead of the Qatar journey, and the November camp will see selected players test themselves against Jamaica on November 9.

One of the best full-back’s in the land, Eta Bawak will be reuniting with Song, though this time, at a different level. Bawak and Song have a little history going between them. In 2018, the defender was named captain of the Intermediate Lions by coach Rigobert Song, in the African Nations Championship tourney in Morocco.

Others in the list include Cameroon’s latest ballon D’or winner, Marou Souaibou. Souaibou is accompanied by the best young player of last season, Wassou Patient. Kemajou has been rewarded for his brace on match day 2 against YAFOOT, and he will be in queue to impress Song, so will Apam Bemol and son of former Indomitable Lion, Harrison Djonkep.

In the middle of the pack, Colombe’s ‘star boy’ Jerome Ngom makes the cut. Oukine Felix, Mbah Louis and Tchikeu Henry are all popular options, as they have been parading the corridors of the national team for some time now.

Cotonsport’s Che Malone who has been a revelation this campaign is listed as one of 8 defenders.

Goalkeeper Mbahbi Marcelin is one amongst 3 goalkeepers, having started the season just like he ended the last, marshaling Gazelle FA to 4 out of possible 6 points in the Elite One.