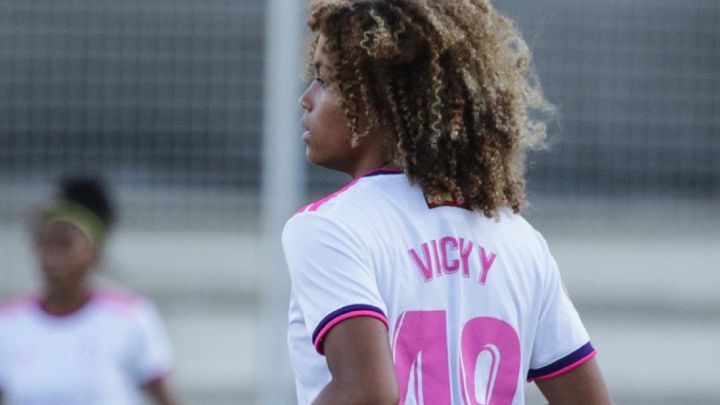 Vicky Lopez made her full Spanish Primera Iberdrola debut for Madrid CFF in a 3-1 derby defeat against Real Madrid in Sunday’s encounter at the Estadio Antiguo Canodromo.

At 15 years, four months and 23 days old, the teenager sensation – a product of the Madrid CFF academy, was handed her maiden start by coach Victor Fernandez after she previously featured thrice as a substitute this season.

Before being handed her first-ever starting role in the Spanish topflight, Lopez had turned out for Madrid outfit against Levante, Eibar and Athletic Bilbao since her promotion from the youth side to the first team this season.

After a 3-1 win at Valencia last week, the 15-year-old forward for the fourth consecutive outing saw her full senior debut end on a disappointing note as Fernandez's side surrendered a first half lead to bowing against their city rivals.

Despite the home defeat, Madrid CFF remains seventh on the Spanish Iberdrola table with 20 points after 14 games and Lopez lasted the duration of the tie on her full first-team game along with Nigeria international Rita Chikwelu.

Born in Madrid to a Spanish father and Nigerian mother, Lopez is still eligible and keen to represent Nigeria at U20 and senior level despite she had already turned out for the U17 women side of Spain.

The youngster's rise at the age of 15 comes just two years after she hugged headlines, helping Madrid to win the Women's LaLiga Promises Tournament crown, scoring three goals in their 4-0 final triumph over Athletic Bilbao and also went on to claim the Best Player of the Tournament and Golden Boot award with seven goals.

Lopez's two-footed ability, brilliance in one-vs-one situations and pace with excellent dribbling skills saw her progress from U14 to the first team came as no surprise after scoring 60 goals in the 2020–21 youth league season.

Following her full senior team outing, she will hope to make more first team action in the upcoming games, as Madrid travel to face Asisat Oshoala's Barcelona in their next league fixture on December 22.