CAF CL: Sundowns coach admits they were not in control 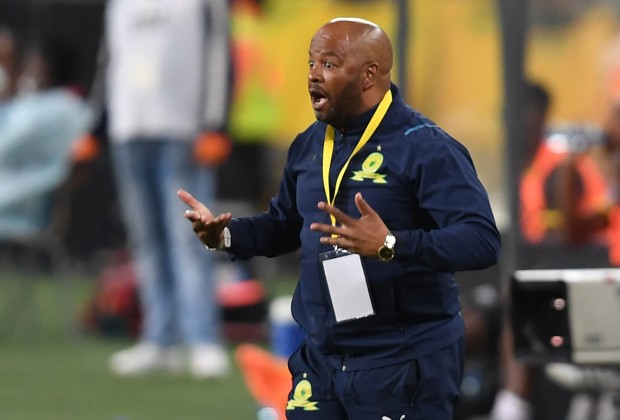 Sundowns co-coach Manqoba Mngqithi was proud of the effort put in by the players, despite their CAF Champions League exit

Mamelodi Sundowns co-coach Manqoba Mngqithi admitted that they were not in control of their CAF Champions League quarterfinal clash against Petro de Luanda, for various reasons including the VAR decisions in the clash.

The two sides met in the second leg quarterfinal clash at FNB Stadium in Johannesburg on Saturday, 23 April, after Petro had won the first leg clash in Luanda 2-1. All Sundowns needed to do was to win 1-0 at home to progress to the semi-finals, but Petro showed that they are no pushovers. The game finished 1-1 as Petro edged the two-legged tie 3-2 on aggregate, as Sundowns got knocked out at the quarterfinal stage for the third time in a row.

“In the second half we had a lot of things that were very unfortunate, the momentum of the game was killed by a whole lot of things – the VAR decisions, I just feel that they took too long,” Mngqithi said to the Sundowns website.

“I wouldn’t say they were right or wrong, but I just feel in a game it has an effect when you have too many stoppages and maybe four or five minutes in the issue of Denis (Onyango) and the handball, I think that’s a decision that can be taken very quickly.

“We ended up forcing a lot of balls and the game became very uncontrollable, but nonetheless I am very proud of the boys. (It’s) unfortunate that we did not qualify to the semi-finals, but I think the boys gave a good account of themselves, and it’s probably us as the leadership that will have to take the bullet and say maybe we need to plan and do better in the next coming matches and make sure that we improve in this space because seemingly we are not achieving our ultimate goals.”

Sundowns can now focus on the domestic competitions, as they are currently on their way to winning a fifth consecutive Premiership title. They are also in the semi-finals of the Nedbank Cup, which is South Africa’s version of the FA Cup.