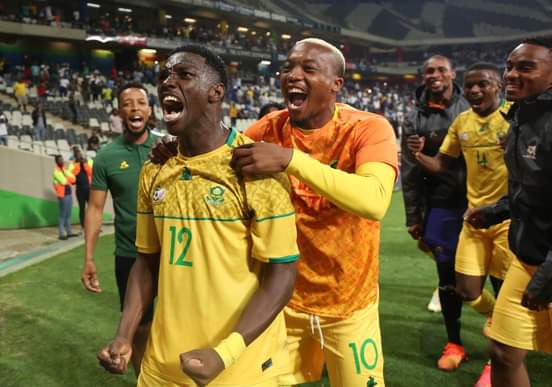 South Africa’s senior national team came from behind to record a 2-1 victory over Mozambique in Mpumalanga on Thursday, November 17.

South African coach Hugo Broos is preparing the team for the 2023 Africa Cup of Nations qualifiers against Liberia next year, so the South African football association organised friendly internationals against Mozambique and Angola, which will be played this coming Sunday, November 20.

Broos brought in some new faces into the team, including Miguel Timm and Monnapule Saleng, who have both been in good form for Soweto giants Orlando Pirates.

But Bafana Bafana, as South Africa is affectionately known, did not make a good start to the game, going a goal down in the first 20 minutes. A shaky start led to Mozambique taking the lead through Nelson Divrassone.

Mozambique held onto the lead until half-time, but things changed in the second period as the hosts found their rhythm.

Bafana Bafana went on the attack a lot more and put Mozambique under pressure. The visitors succumbed to the pressure as Bafana Bafana found the equaliser through striker Bongukuhle Hlongwane from close range, 11 minutes into the second half.

That sparked some more life in Bafana Bafana as they went in search of another goal. It came through the boot of Hlongwane, who brilliantly finished after he was set up by Themba Zwane.

Broos seemed to be happy with the result and will be hoping that his players can show the same fighting spirit when they take on Angola on Sunday, which will be a tougher test.