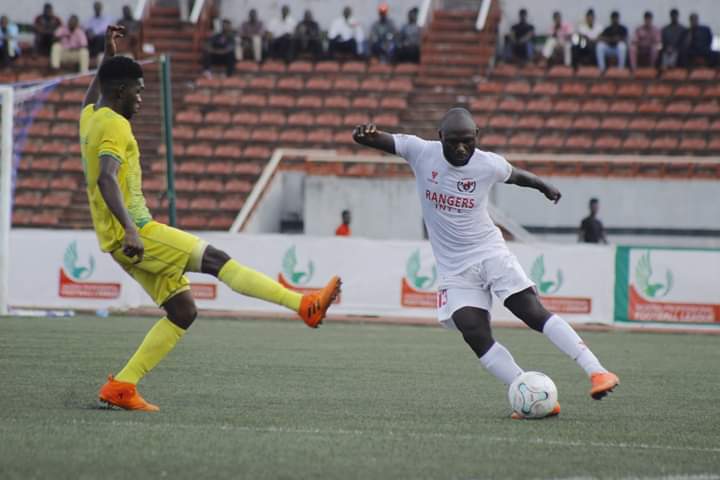 The second round of the 2022 Nigeria Professional Football League (NPFL) resumed from a two-week break on Saturday with defending champions Akwa United forced by table toppers Rivers United to a 1-1 draw in Uyo.

In the reverse fixture, Rivers United walloped Akwa United 4-1 in Port-Harcourt to end the round with 42 points from 19 matches but in the week 20 fixture, Etim Matthew's own goal put Rivers United in front in the 17th minute.

Akwa, however, staged a fight back in bid for an equaliser when Adeyeye Adeyemi eventually equalizer for the champions on his debut of an assist from Etim Mathew to avoid defeat at home.

In Aba, Enyimba returned to winning ways as coach Finidi George guided his side to ending their poor run at home with a 2-0 win over Wikki Tourist. The People's Elephants broke the deadlock in the 36th minute through their new man, Abel James, who scored on his debut at the Aba Stadium.

James scored from Sadiq Abubakar’s cross to complement the entertainment the fans had been receiving and ensure they were in front going into the break. On resumption, Victor Mbaoma doubled Enyimba’s lead four minutes into the second half with a beautiful finish from Gabriel Orok's through pass to silence Kabiru Dogo’s side.

Sunday’s victory moved Enyimba to the seventh spot on the log with 29 points while their visitors, Wikki Tourists dropped to the 10th position with 27 points.

In Makurdi, Lobi Stars made a bright start to life under their new coach Baba Ganaru as they defeated Enugu Rangers 2-0. After a drab first half, they host broke the deadlock through Raphael Ayagwa’s 68th-minute penalty and Godfrey Utim’s 87th-minute strike sent the visitors back to Enugu empty-handed.

Lobi Stars have now moved out of the relegation zone as they are currently in the 16th position with 22 points and the Rangers still stay firm in the third position with 34 points, ahead of Kwara United on goals difference.

Elsewhere, Remo Stars suffered a 2-1 away defeat in Ilorin against Kwara United. The Sky Blues raced into an early lead in the 33rd minute through Hadi Haruna but the Afonja Warriors levelled the scores two minutes before half-time thanks to Stephen Jude’s strike.

With the scoreline level before the break, a 74th-minute goal from Samod Kadiri sealed the victory for Abdullahi Biffo’s men as they moved closer to Rangers in the fourth position, Remo dropped to the fifth spot with 32 points.

In Jos, Shooting Stars were thrashed 2-0 on the road by Nasarawa United at their adopted Jos Stadium in Plateau.

Barnabas Daniel effort from the penalty spot in the 65th minute saw Kano Pillars’ poor run on the road surfaced again as they suffered a 1-0 defeat to Gombe United.

MFM FC had something to cheer for as they climbed out ofthe bottom of the table for the first time this season after 20 games.

The Lagos-based club edged Heartland courtesy of  Micah Ojodomo’s 33rd-minute strike and saw them bounce back from their last home defeat to Kwara United.

Meanwhile, authories confirmed that the fixture between Katsina United and Abia Warriors has been postponed due to ‘logistics reasons’.