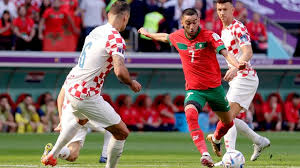 Morocco clashes with Croatia in their first group game

Morocco pits Belgium in the second game of Group F with loads of stakes, after a positive result for both teams on the first day.

A second World Cup match always has a special flavor. After the pressure that accompanies the first match, comes that of a potential qualification.

For Morocco and Belgium, it is even more correct following their respective results in their first meeting.

Opposed against Croatia, finalists of the last World Cup, Morocco was able to obtain a precious point with a zero-all draw which gives hope of a first qualification for the final phase since 1986.

As for Belgium, semi-finalists in 2018, they won 1-0 after a difficult match against Canada.

Against Luka Modric’s Croatia, the Atlas Lions put together a superb performance by obtaining a draw, like the 1986 and 1998 editions, in which the first match ended in a draw.

Coach Hoalid Regragui, playing his first World Cup as a coach, was able to contain the Croatian incursions despite having less possession (32%). But the Moroccan defensive was not broken. Top displays came from PSG star Achraf Hakimi who recovered 7 balls and managed 100% of his tackles and midfielder Azzedine Ounahi who won 71 % of his duels in midfield.

The defensive sector allowed Morocco to concede only 6 shots including two on target, all stopped by Sevilla FC goalkeeper Yassine Bounou.

But it is the impressive moving forward as well. With 8 shots including 2 on target, the teammates of Hakim Ziyech showed that they could be dangerous, especially outside the area where they attempted 5 shots.

Belgian keeper Thibaut Courtois was voted best goalkeeper in the world in 2022, had few shots to worry about in the first game.

This is Morocco’s sixth participation in the World Cup. In Mexico in 1986, they qualified in the round of 16 where they lost to West Germany 1-0.

The Belgian selection is one of the favorites for the title in Qatar. With stars like Real Madrid forward Eden Hazard, Manchester City’s Kevin De Bruyne and Atletico Madrid’s Yannick Carrasco, danger can come from anywhere.

Against Canada, De Bruyne attempted 6 crosses, although none of them were converted.

Semi-finalists of the last World Cup, eliminated by France after a match full of tension, the Belgians will seek to keep possession of the ball thanks to an offensive strategy with a lot of passes (512 against Canada).

But they will have to correct certain defensive aspects, which could have cost them dearly against Canada. While Thibaut Courtois saved a penalty from Bayern Munich’s Alphonso Davies, who could have scored Canada’s first goal in World Cup history, the Belgians conceded 21 shots with 16 of those coming inside the box.

A victory against Morocco would ensure Belgium’s their qualification for the round of 16, where they would find one of the teams of Group E, made up of Spain, Japan, Germany and Costa Rica